Pear psylla, Cacopsylla pyricola, is an economically significant pest of pears in the Pacific Northwest. Although it may use other plants as temporary hosts during the winter months, especially apples, it can only reproduce on pears.

Damage to pears is caused by honeydew secreted from pear psylla nymphs or adults as they feed on the fruit, sucking juice from the host. The honeydew is deposited onto the fruit and the drips cause dark russet blotches or streaks which result in downgrading of the fruit. If present in very high numbers, pear psylla can stunt and defoliate pear trees and cause fruit drop (known collectively as psylla shock). 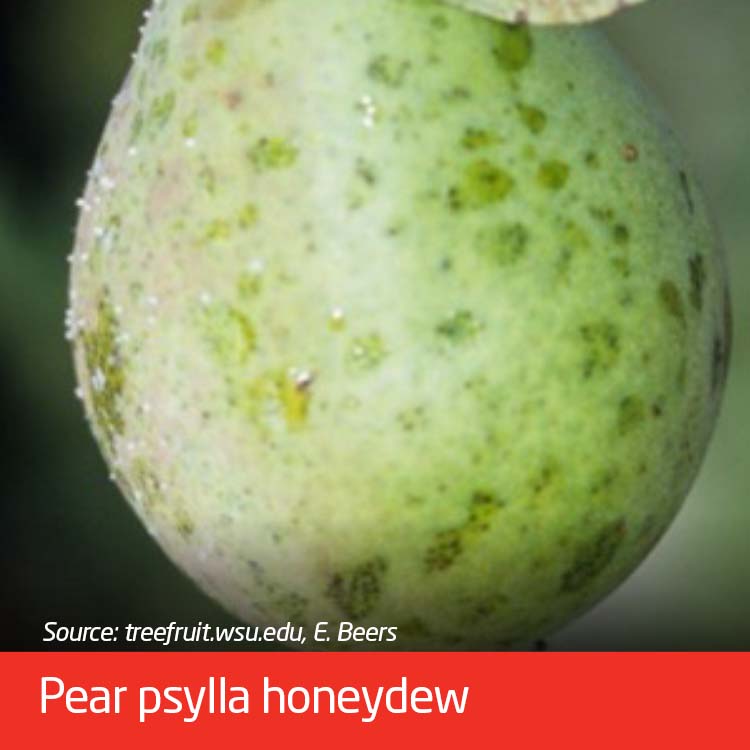 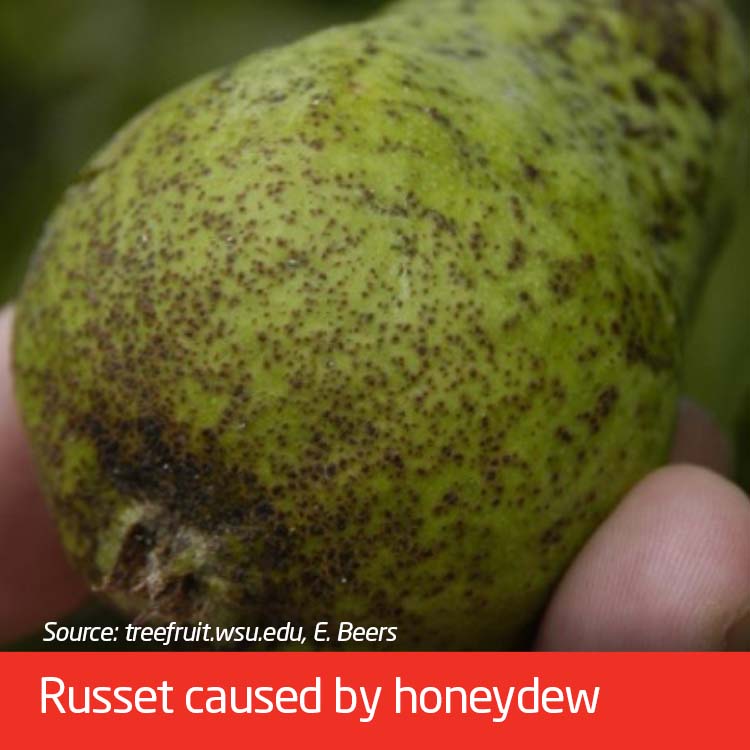 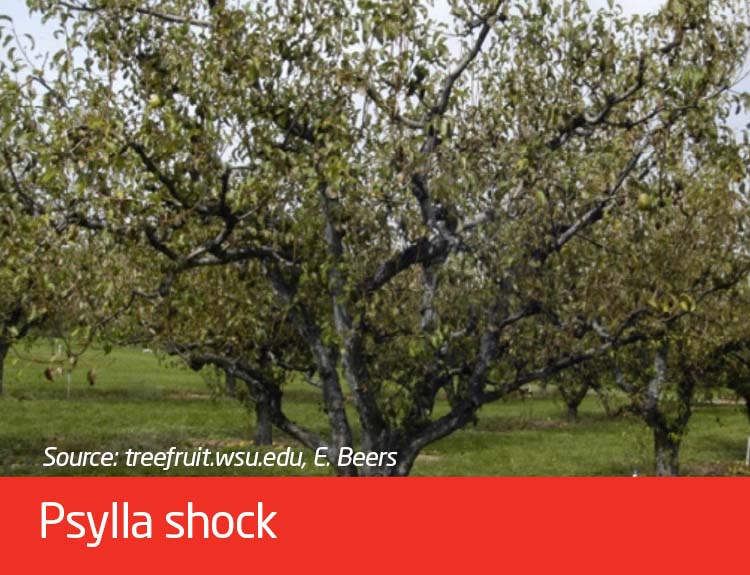 Pear psylla have five nymphal stages or instars and two adult forms, winterform and summerform. Eggs are cream colored, but become yellow to orange closer to hatching. Nymphs are distinguished based on: i) nymphal stages getting progressively larger, flatter and more oval, ii) enlargement of the wing pads in the third, fourth, and fifth instars, and iii) coloring differences—first instars are creamy yellow, fourth instars are yellow-green to light tan, and the fifth instar nymphs are dark green/brown. Winterform and summerform adults are distinguished based on: i) time of year, ii) length (winterform are ~2.5 mm in length vs. ~2.0 mm for summerform), and iii) differences in the appearance of their wings (winterform wings have a smoky area halfway back along the inner margin, whereas summerform wings are clear except for veins). All nymph and adult stages of pear psylla have two red eyes. 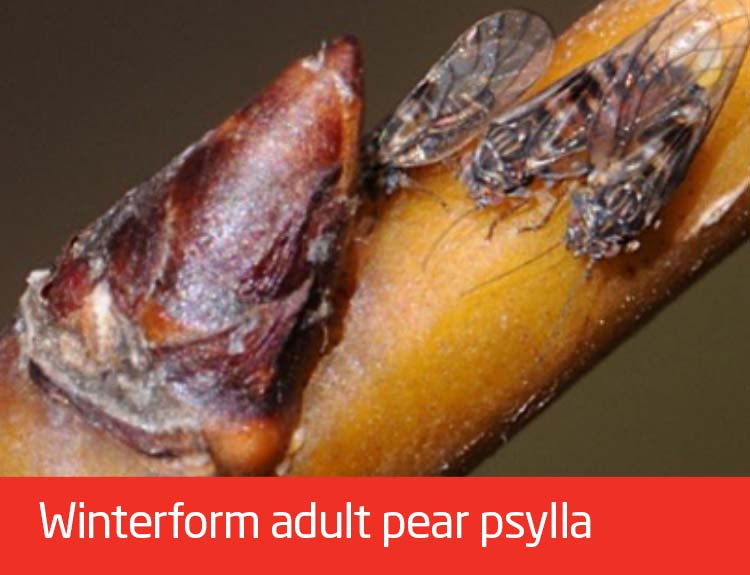 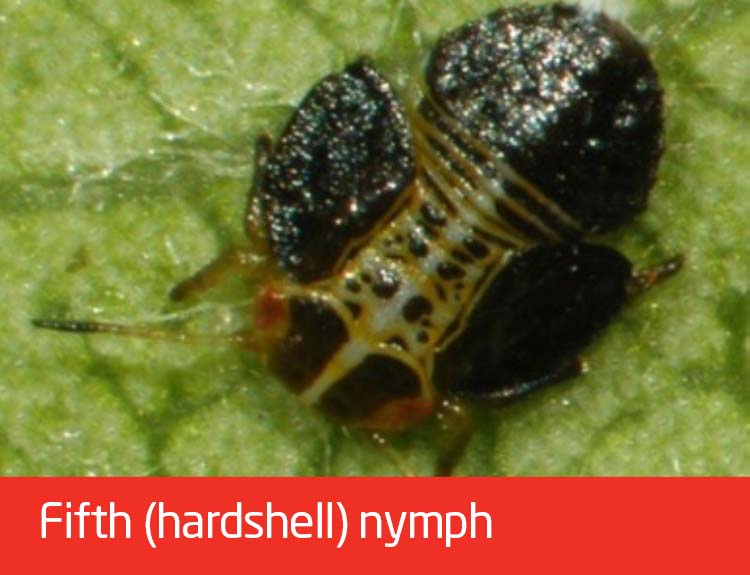 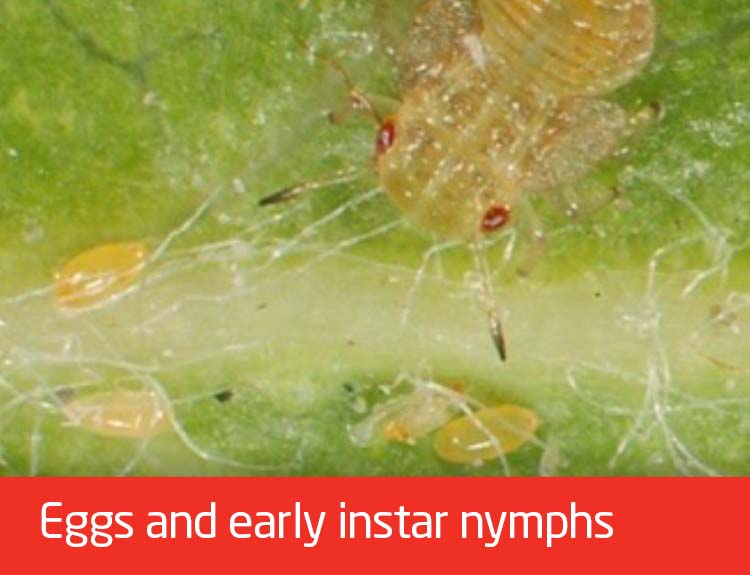 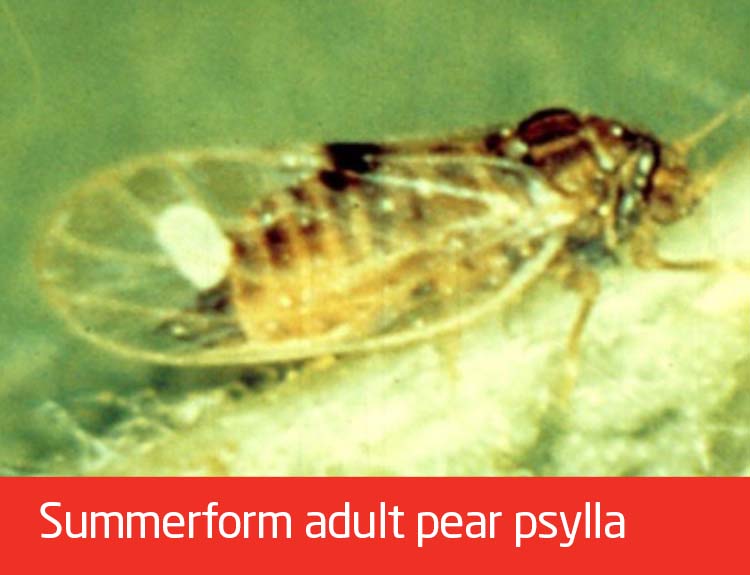 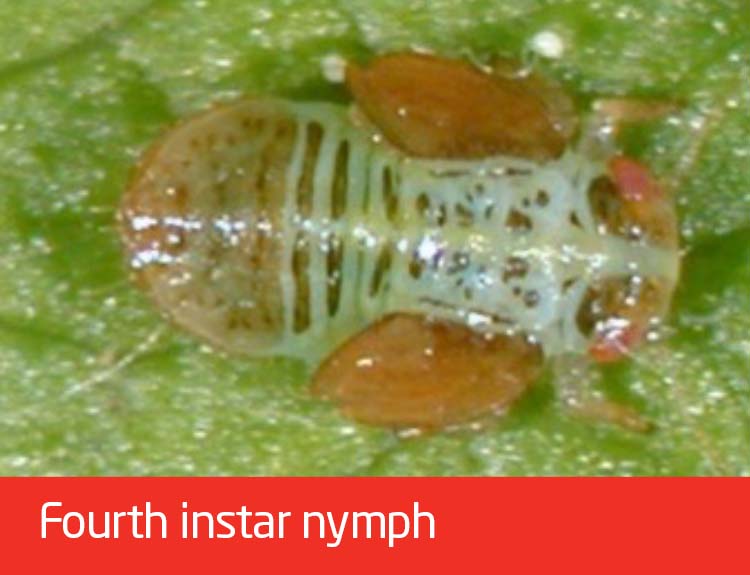 Pear psylla progress through winter in a semi-dormant state as winterform adults. They return to pears and start laying eggs when the pear buds begin to swell through petal fall, placing their eggs on new growth. These eggs hatch over an extended period (corresponding to the extensive time period over which egg laying occurs) and develop from first instars to summerform adults. There are 2-3 generations of summerform adults before the winterform generation develops in the fall.

It is important to monitor pear psylla populations, counting adults using a beat tray method or counting nymphs and eggs on fruiting spurs.

Important aspects for control of pear psylla include: i) preventing overly vigorous growth and/or limiting the amount new growth, reducing the amount of preferred tissue available to pear psylla and improving spray penetration into the canopy, and ii) chemical control, which typically involves 2-3 pre-bloom sprays to kill the winterform adults (dormant—when egg-laying begins, delayed dormant, and clusterbud), and growing season sprays based on a nymph density greater than 0.3/leaf. It is recommended to use a mineral oil at the first application (dormant timing) to delay egg-laying and thus synchronize egg hatch. It is also highly recommended to use chemistries soft on natural predators so as to benefit from their natural control of pear psylla populations.

Recommendations: For control of pear psylla as part of an overall IPM program in conventional and organic pear orchards: