JRM’s winningest sponsor-driver duo to return for sixth NXS season in 2021MOORESVILLE, N.C. (Nov. 2, 2020) – Today JR Motorsports announced that cornerstone partner BRANDT Professional Agriculture will return for its sixth season along with veteran driver Justin Allgaier behind the wheel of the No. 7 Camaro. Distinguished as JRM’s winningest sponsor, BRANDT will serve as primary partner on Allgaier’s Chevrolet for 20 races during the 2021 NASCAR Xfinity Series season.

Founded in Central Illinois, BRANDT is one of the fastest-growing, family-owned companies in the United States and a leader in the agriculture industry. Specializing in innovative products and services to help growers get the maximum return on their crops, BRANDT currently supplies customers in 48 states and more than 60 countries.

“We have built an amazing partnership with Justin and the Earnhardt family at JR Motorsports,” said Rick Brandt, President and CEO of BRANDT. “Together we have had great success on the track and have established a unique platform to promote the agriculture industry and to grow our business. I look forward to closing out the 2020 season by securing our first Xfinity Series Championship! And I’m excited to continue this relationship in 2021.”

BRANDT has had a long-time presence in NASCAR, first partnering with Allgaier in 2011. Since the Illinois native made the move to JR Motorsports in 2016, Allgaier has scored 11 of the team’s 51 total victories, the most by a driver in the organization’s history.

“Over the past five years, we’ve been fortunate to build a very rewarding relationship with BRANDT, while highlighting the significance of the agriculture industry,” said Kelley Earnhardt Miller, JRM general manager. “As family-owned and operated businesses, we share a lot of the same core values. Winning means a lot to Rick (Brandt) and his employees, and we couldn’t be happier to go after more trophies with Justin in 2021.”

During Allgaier’s tenure with JRM, he’s been a NXS title contender each year, advancing to the Championship 4 four out of the last five seasons. This year, the 34-year-old driver is in the hunt once again as one of only four competitors left vying for the 2020 NXS Championship. During the regular season Allgaier led a career-high 896 laps and earned three victories, including back-to-back wins at Richmond Raceway.

“I’m looking forward to being back at JR Motorsports next year and having the BRANDT relationship extend another year. We’ve become like family and I couldn’t imagine being anywhere else,” said Allgaier. “I’m proud of what we’ve been able to accomplish together, not only from a production standpoint on the track and getting wins and being competitive week in and week out, but also being able to bring awareness to the agriculture industry and how important it is to everyday life. Our goal is to continue growing those successes as we battle for the championship this season and go for more wins next year.”

In addition to the 20 primary races, BRANDT will also have associate placement on the No. 7 Camaro for the remaining 2021 races. Primary sponsorship for Allgaier for the balance next season will be announced at a later date.

ABOUT JR MOTORSPORTS:
JR Motorsports is the management company and racing operation for Dale Earnhardt Jr., NASCAR’s 15-time Most Popular Driver and winner of 50 NASCAR-sanctioned races.  Now in its 19th year of overall competition, JR Motorsports races in multiple divisions, including the NASCAR Xfinity Series where it won championships in 2014, 2017 and 2018.  The company also competes in Late Model competition and owns four championships in regional late model divisions.  To learn more about the organization, its drivers and its sponsorship opportunities, visit www.jrmracing.com. 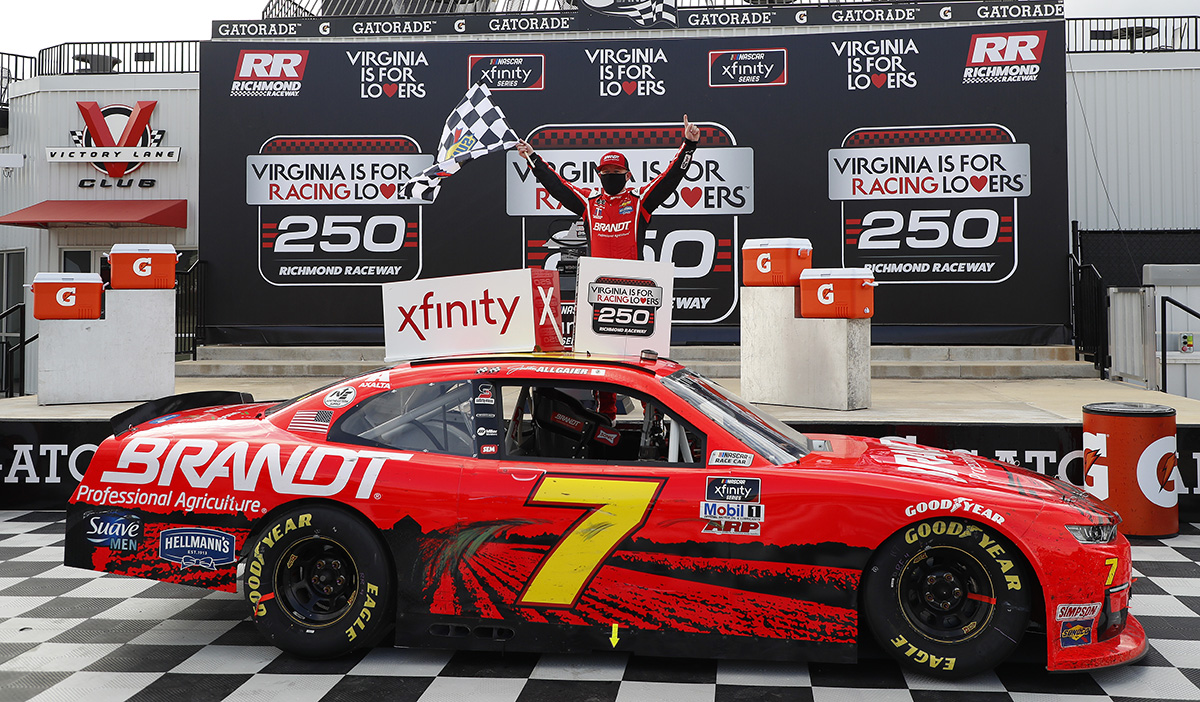