Founded in 1953 in central Illinois, BRANDT is a fast-growing, family-owned company and a leader in global agriculture. Specializing in innovative crop-input products and services to help growers get maximum yield, BRANDT supplies customers in 49 states and more than 80 countries.

“We’re thrilled to commemorate BRANDT’s 70th anniversary in 2023,” said JRM CEO Kelley Earnhardt Miller. “Evelyn, Rick, Sierra and the entire Brandt family should be so proud of reaching this milestone. There are a lot of challenges in running a family business and for BRANDT to have done it so successfully for seven decades is remarkable. BRANDT has been such a strong partner for our organization and we are honored to be able to play a role in such a landmark celebration.”

In 24 previous NXS starts at “The World Center of Racing,” Allgaier has amassed six top fives, 10 top 10s and a best finish of second (twice). Since joining JRM in 2016 along with BRANDT, Allgaier has scored a combined 16 wins, 99 top fives, 158 top 10s and qualified for the Championship 4 in the NXS Playoffs in five out of seven seasons.

“It’s an honor to be part of such a special celebration with everyone at BRANDT,” said Allgaier. “Celebrating their 70th anniversary is truly a testament to the dedication everyone at BRANDT has to the agricultural industry. Their longevity and continued growth are remarkable and I’m proud to be just a small part of this amazing group. Plus, I think this platinum scheme looks phenomenal and I can’t wait to see what we can do with it when we get to Daytona next month.”

“Very few companies reach 70 years,” said Rick Brandt, President and CEO of BRANDT. “But we’re just getting started. My daughter, Sierra-Shae, is now an owner and we’re building a company for the long term. We’re ready to go cause a platinum party when we get to Daytona.”

BRANDT and JRM additionally announced that BRANDT do Brasil driver Miguel Paludo will return to the organization to compete in three NXS road course events in 2023 for the third consecutive season. Paludo, a seven-time champion in the Porsche Carrera Cup series, will pilot the No. 88 BRANDT Professional Agriculture Chevrolet in the NXS races at Circuit of the Americas (March 25), the inaugural NXS event at the street course in Chicago (July 1) and the Indianapolis Motor Speedway Road Course (Aug. 12).

“To get Miguel (Paludo) back in the No. 88 BRANDT Chevrolet for JRM is really special as we celebrate our platinum anniversary,” added Brandt. “I’m extremely proud of our expansion into Brazil, and Miguel continues to be a key component in helping our organization grow. I can’t wait see him and Justin (Allgaier) out there for three events again this year. With the unveiling of Justin’s platinum scheme for Daytona and the return of Miguel, this is the start of what’s going to be a great year.”

ABOUT BRANDT:
A leading agricultural company, BRANDT serves growers and farmers around the globe. Founded in 1953 by Glen Brandt and his sister Evelyn Brandt Thomas to help Illinois farmers adopt new and profitable technologies, the company has experienced aggressive growth under the leadership of President and CEO Rick Brandt. BRANDT’s focus is providing the products and services that give growers the best opportunity for maximum return while building a stronger, healthier and more abundant food supply. For more information, visit BRANDT on the web at www.brandt.co.

ABOUT JR MOTORSPORTS:
JR Motorsports is the racing operation co-owned by NASCAR Hall of Fame member and 15-time Most Popular Driver Dale Earnhardt Jr., Kelley Earnhardt Miller and NASCAR Hall of Famer Rick Hendrick. Now in its 22nd year of overall competition, JR Motorsports competes in multiple divisions, including the NASCAR Xfinity Series where it currently fields four full-time teams and earned championships in 2014, 2017 and 2018. The company also races in Late Model competition and owns five championships in regional Late Model divisions and added a prized national title in 2020. To learn more about the organization, its drivers and its sponsorship opportunities, visit www.jrmracing.com. 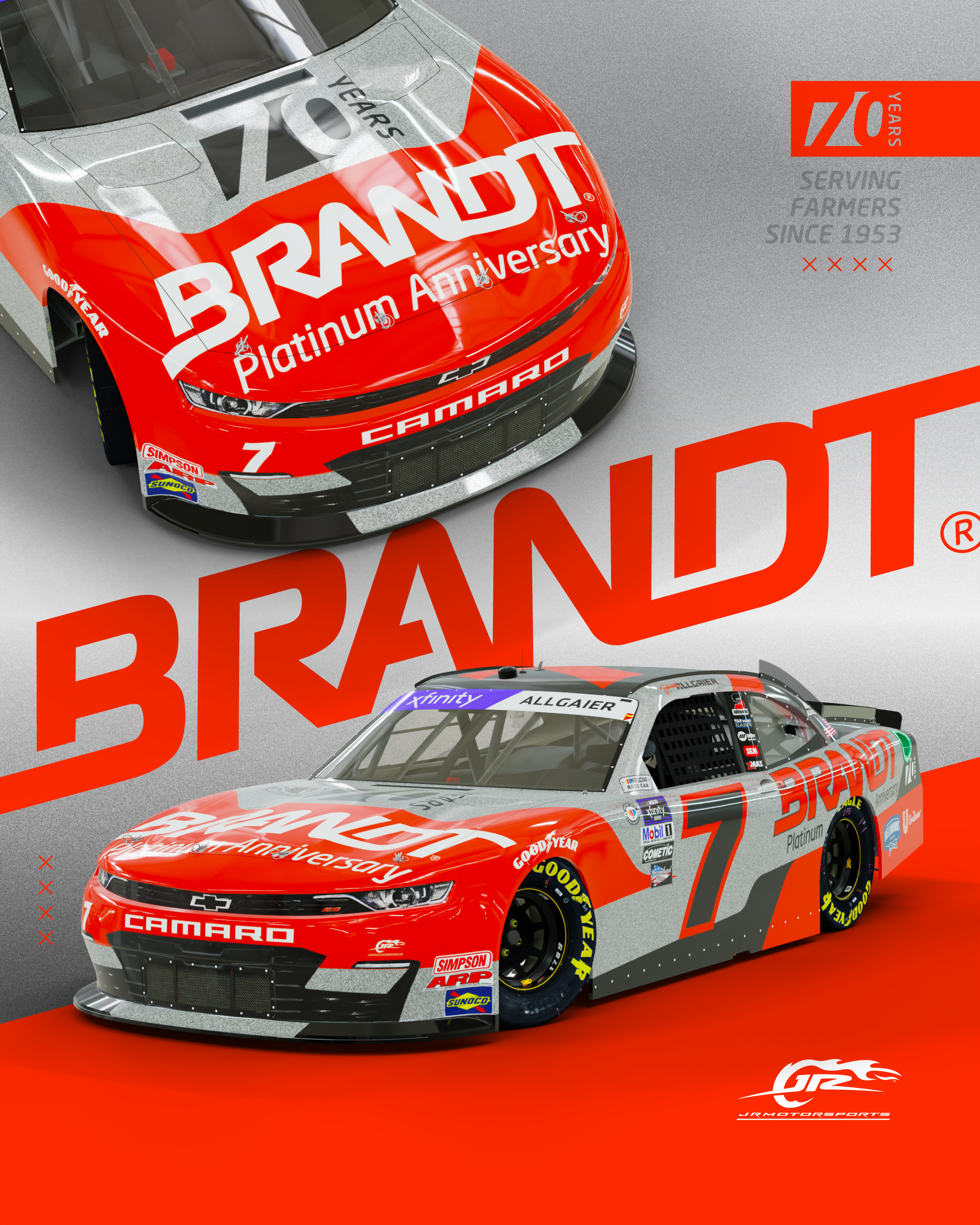