Justin Allgaier earned his second consecutive third-place finish in the NASCAR Xfinity Series point standings on Saturday following a 12th-place finish in the season finale at Homestead-Miami Speedway. The Illinois native and his BRANDT/TradeMark Nitrogen team ended the year with two wins, 10 top-five and 17 top-10 finishes.

The team went into Championship 4 weekend without the leadership of crew chief Jason Burdett, who was serving a one-race suspension. Serving as interim crew chief was No. 7 car chief Billy Wilburn. Chad Knaus, crew chief at Hendrick Motorsports, also provided assistance atop the pit box. Starting the 300-mile race in the 16th position, Allgaier moved his way up to 12th and radioed to the team on lap 12 that the No. 7 Chevy was loose in, tight center and loose off. The only non-stage-ending caution of the day came out on lap 20 while Allgaier was still in the 12th position. The team opted to stay out and on the restart, Allgaier was shuffled back to 14th and had worked his way up to 13th before the handling started to fade on his car. He ended Stage One in the 19th position.

Under the stage-ending caution, Allgaier came to pit road for four tires and fuel, along with wedge and track-bar adjustments. Taking the green for Stage Two in 13th on lap 52, the 31-year-old driver quickly advanced to the 10th position. He reported to the team on lap 58 that the No. 7 Chevy had better fire-off speed. Knaus relayed back that he was running lap times comparable to everybody he was racing. He was able to work his way up to ninth before the green-and-white checkered flag waved on lap 90 for the end of Stage Two.

The team had Allgaier pit for four tires, fuel and multiple adjustments to get the BRANDT/TradeMark Nitrogen Chevy more dialed in. The car came to life after the green flag dropped for the final stage on lap 97. Allgaier advanced from 11th to fifth by lap 103. On lap 114, he radioed that the No. 7 was snappy at the top in Turns 3 and 4. He was running in the eighth position when scheduled green-flag pit stops got underway on lap 140. Allgaier came to pit road just a few laps later for four tires, fuel and a wedge adjustment. On lap 155 he was up to seventh, but as the run went on, his handling began to fade. Allgaier battled to try to stay inside the top 10, but ultimately took the checkered flag in the 12th position.

Justin Allgaier, driver No. 7 BRANDT/TradeMark Nitrogen team
“We did a good job yesterday in practice and felt like the car had good speed. Unfortunately when we started the race tonight, we just knew something was way off. We just struggled. There were moments on those restarts that we picked up quite a few spots and we thought that maybe we had a shot to get up there and battle it out, but ultimately on the long run we just really started dropping speed and were way too loose. You work hard all year to get to this point and obviously the goal at Daytona is to have a shot when you get to Homestead to go for a championship. Hats off to William (Byron). He did a great job. We’ll get ready for next year. This team works hard and I know that we’re capable of winning a championship.” 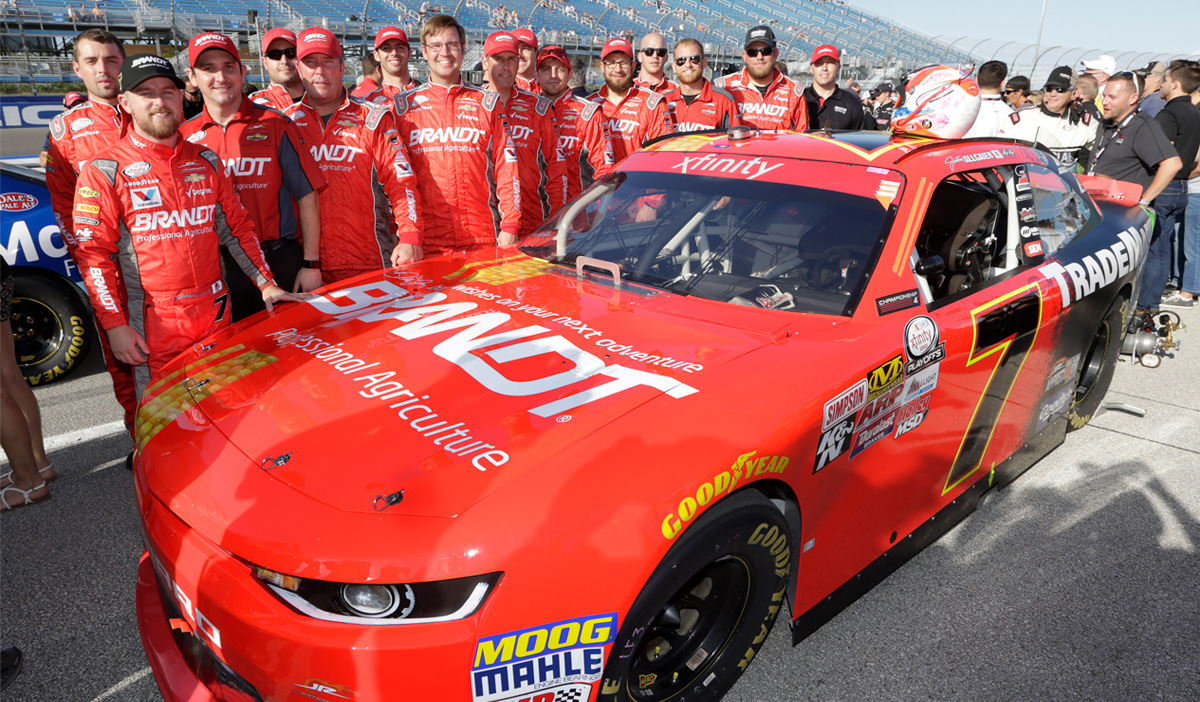