Justin Allgaier and the BRANDT Professional Agriculture team had two reasons to celebrate on Saturday afternoon after winning the DC Solar 200 and claiming the first $100,000 Dash 4 Cash prize of the season. Allgaier led 85 of 200 laps on his way to earning his fourth-career NASCAR Xfinity Series victory and the first NXS win at Phoenix International Raceway for JR Motorsports. The victory earned Allgaier five NXS playoff points and moved him up to fourth in the championship standings, just 29 points behind the leader.

Starting fifth in the 200-mile race, Allgaier advanced to second by lap 2. When the first caution waved on lap 13, the 30-year-old relayed to the team that he was really good to start and was beginning to get a touch tight in the center. The team stayed out and on the lap-19 restart, Allgaier was able to stay with leader Erik Jones, surpassing him on lap 20. The two continued to battle, but Allgaier was able to maintain the lead until Jones got by on lap 29.

Back in second, Allgaier relayed that the BRANDT Chevy was getting tighter as he ran. The Illinois native fought as hard as he could, but faded back to sixth by time the caution fell for the end of Stage One at the completion of lap 60. The team opted to pit for four tires, fuel and a wedge adjustment to loosen up the No. 7 Camaro. Starting Stage Two in fourth on lap 71, Allgaier jumped to second by the end of the first lap back under green and retook the lead on lap 82. With 15 laps remaining in the stage, the JRM driver came over the radio to say he was starting to tighten up again. Second-place Ryan Blaney was starting to gain momentum and made the pass on Allgaier with 11 laps remaining to win the second stage. Allgaier’s second-place stage finish qualified him for a spot in the Xfinity Dash 4 Cash leading into the final portion of the race.

Under the caution, the team gave the BRANDT Chevy four tires, fuel and an additional wedge adjustment. Allgaier started the final stage in fourth on lap 130 and quickly worked his way to second before another caution fell on lap 134. On the lap-138 restart, Allgaier took the green on the bottom and worked his way by Austin Dillon to retake the top spot with 62 laps to go in the race. When another caution came out on lap 156, the team made their final pit stop of the race, taking four tires when some opted to take two. The option put Allgaier in seventh for the restart with 37 to go, but it proved to be the right call as he was able to retake command of the race with 35 laps remaining.

On lap 168, another yellow waved for a spin and on the restart with 28 to go, second-place Jones got the jump, taking over the lead. Allgaier was able to work his way back by with 19 laps to go and ultimately held off his competitors over two more restarts to claim his fourth-career NXS victory in 211 starts and JRM’s 32nd NXS win.

Allgaier beat Blaney to the line to earn his first victory with JRM. Jones finished third with Allgaier’s teammates William Byron and Elliott Sadler rounding out the top five. The day ended with all four of JRM’s entries finishing inside the top 10. Allgaier’s Xfinity Dash 4 Cash bonus was his second with JRM.

Justin Allgaier, driver No. 7 BRANDT Professional Agriculture team
“Last year was tough. We had really good runs all year but we weren't able to get to Victory Lane, but these guys fought hard. This was the same group of guys we had last year, and to be able to do it here in Phoenix and win the first Xfinity Dash 4 Cash race. A huge thank you to them for what they do for our sport. I have to thank all of our partners here at JR Motorsports. Rick Brandt has been wanting us to get a win and we’ve be trying. A huge thank you to everybody back at the shop. This is a team effort. We had four really good JR Motorsports hot rods out there. How cool is it to get a Camaro to Victory Lane here at Phoenix?” 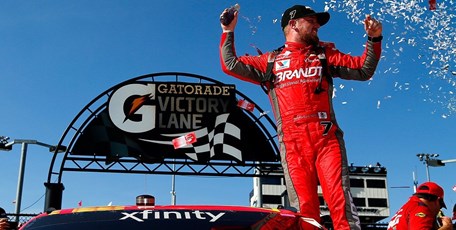