Justin Allgaier Takes the Checkered Flag at His Home Track

Illinois native Justin Allgaier piloted the BRANDT / Celebrating the Future of Ag Chevrolet to Victory Lane on Saturday afternoon at his home track of Chicagoland Speedway after winning TheHouse.com 300. It was his second NASCAR Xfinity Series win at the 1.5-mile facility, his second NXS victory of the season and the fifth of his career. Allgaier will enter the NXS Playoffs next week as the second seed, just two points behind leader William Byron.

The BRANDT Chevy rolled off the grid 14th for the 200-lap race. Allgaier was up to 10th by lap 3 and in seventh on lap 33. He stayed quiet on the radio and remained in the same position until the conclusion of the first stage on lap 45. Under the stage-ending caution, he relayed to crew chief Jason Burdett that the No. 7 had started losing rear grip and was tight at the front end. The team made a pit stop for four tires, fuel and a track-bar adjustment.

Taking the green for Stage Two in ninth on lap 53, Allgaier fell back to 11th initially, but began working his way back forward. Up to eighth by lap 90, he relayed that the BRANDT Chevy was just too tight. Claiming the eighth position at the conclusion of Stage Two, the team came to pit road under the yellow for four tires, fuel and another adjustment.

Firing off in 11th for the final stage on lap 97, the JR Motorsports driver raced his way up to sixth within two laps. As the run went on he reported that he needed the front end to turn better. Allgaier was in the seventh position when green-flag pit stops began. Coming to pit road around lap 141, the team made a fast stop for four tires, fuel and a track-bar adjustment. He was back in the eighth position when a caution came out on lap 151. Burdett called Allgaier in for a pit stop for four tires, fuel and another chassis adjustment.

Allgaier restarted in seventh on lap 155 and was up to fifth in a hurry. On lap 181, another caution came out and again the field came to pit road. The BRANDT team gave the No. 7 BRANDT Chevy four fresh tires and Allgaier restarted in third on lap 186. On the restart, Allgaier made a power move to the bottom to take over the lead. Teammate Elliott Sadler was closing in on Allgaier when another yellow flag waved on lap 190. The 31-year-old was able to maintain the lead on the restart with seven laps remaining and held on to the top spot to give JRM its 36th NXS victory and third at Chicagoland Speedway.

Justin Allgaier, driver No. 7 BRANDT / Celebrating the Future of Ag team
“This is incredible. I’ve been fortunate enough to go to Victory Lane here before, but it was on fuel mileage. Today these guys did an awesome job. I can’t thank everyone at JR Motorsports enough. My team, the No. 7 team, did a great job. To have the BRANDTstretch and to have all those folks down there in Turns 3 and 4 and up in the grandstands. There’s nothing cooler than winning at home.” 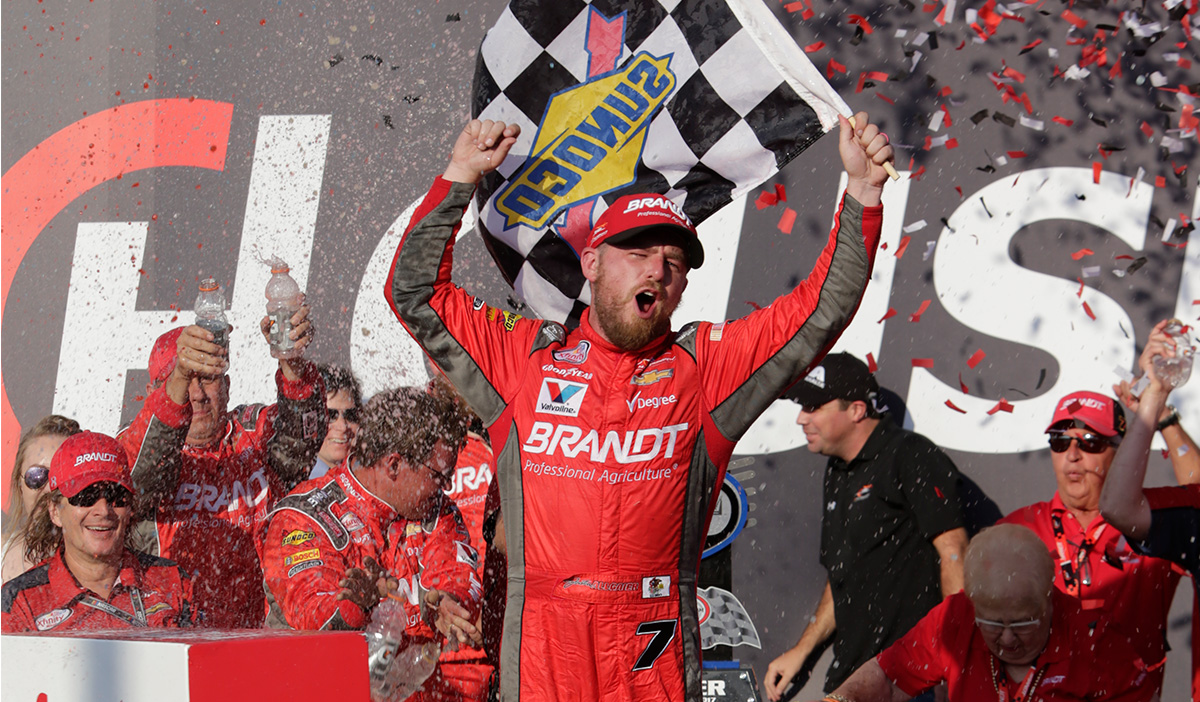