SPRINGFIELD, Illinois (October 28, 2015) – BRANDT, a leading agriculture retailer and manufacturer of agricultural specialty products, will join JR Motorsports with driver, Justin Allgaier, for the 2016 NASCAR Xfinity (NXS) Series season. Allgaier will pilot the No. 7 for the entire season, competing for the series championship with BRANDT as the primary sponsor for 18 of 33 races.

2016 will mark BRANDT's sixth season in one of NASCAR's national series with Riverton, Illinois native Justin Allgaier. The deal with JRM runs through 2017.

“We set high goals and we aim to lead in everything we do,” said Rick Brandt, President & CEO of BRANDT. “We see a partnership with Dale Earnhardt Jr., Kelley Earnhardt-Miller, Rick Hendrick and the entire JRM organization as the next logical step for our brand. The resources JRM provides, both on and off the track, will continue to build our business, engage growers and tell the positive story of agriculture.”

BRANDT will continue to lead an all agriculture car.

“JR Motorsports is privileged to bring BRANDT and Justin back into the Xfinity Series,” said Kelley Earnhardt Miller, co-owner and general manager of JRM. “Like JRM, BRANDT is a family business that prides itself on being an industry leader. We’re excited to give both BRANDT and Justin a renewed avenue for success and look forward to what lies ahead in 2016 and beyond.

"Allgaier has won three times in NXS competition, twice in a BRANDT-branded car. In 174 career NXS starts, he’s scored 29 top-five and 84 top-10 finishes; he was named the series’ rookie of the year in 2009. Allgaier finished a career-best third in the NXS championship standings in 2011. Before joining the NXS ranks, he was the 2008 ARCA champion. For the past two years, he has competed in the NASCAR Sprint Cup Series.

"I'm ready to win races and a championship for BRANDT and JRM," said Justin Allgaier. "We have had a lot of success together, but it's time to take it to the next level. With JRM behind us, we’re going to build excitement—and business—around the program.”

Headquartered in Springfield, Ill., BRANDT has been part of NASCAR since 2011, building awareness for the world’s most vital industry. Joining BRANDT on the car are the National FFA Organization, Nutrients for Life Foundation, Precision Tank, TradeMark Nitrogen, Grigg Brothers and BRANDT iHammer.

“The ag car is a simple, yet powerful concept,” explained Brandt. “People like to eat. But they don’t know where their food comes from or how it gets to their plate. Our car not only builds our brand it showcases the complex processes that result in food on your fork. We’re proud of the ag industry and we want to celebrate the hard-working men and women who make it go. JRM gives us unprecedented consumer reach to tell that story.”

The 2016 season will kick off in February at Daytona International Speedway.

For more information, visit BRANDT on the web at: www.brandt.co

ABOUT JR MOTORSPORTS: JR Motorsports is the management company and racing operation for Dale Earnhardt Jr., NASCAR’s 12-time Most Popular Driver and winner of more than 40 NASCAR-sanctioned races. JR Motorsports competes in multiple racing divisions, including the NASCAR XFINITY Series, in which it won the 2014 championship with Chase Elliott. The company also competes in regional late model divisions, in which it just earned its second championship in three years. To learn more about the organization, its drivers and its sponsorship opportunities, visit www.jrmracing.com. 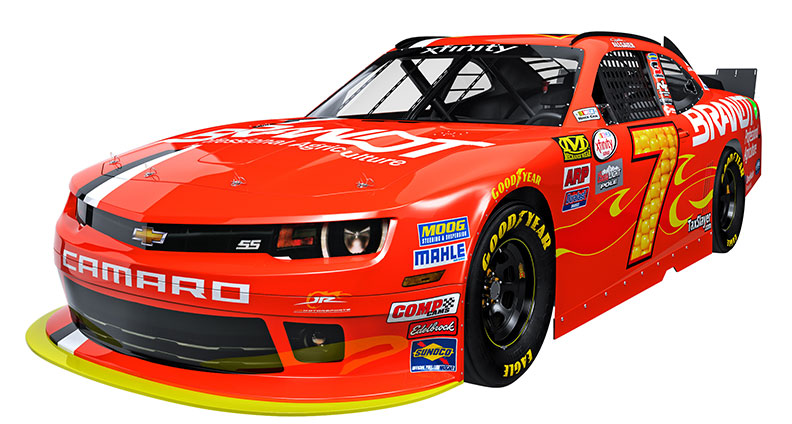