Mites are a common and important pest in apple orchards in the Pacific Northwest (PNW). In the right environment, mite populations can grow exponentially and, therefore, controlling them is important.

Spider mites (Tetranychidae) and rust mites (Eriophyidae) are both pests of apples. Spider mites are small (less than 0.5 mm long) and easier to see with a magnifying glass or hand lens, but can be seen with the naked eye. Spider mites produce characteristic webbing, a common sign that spider mite populations are high in an orchard. McDaniel spider mite, two-spotted spider mite, and European red mite may all present as pests in apple orchards in the U.S. In contrast, rust mites are more elongated, but only half the length of spider mites and thus require magnification to view. They have a wedge-like shape and two pairs of legs at the front end of the body. 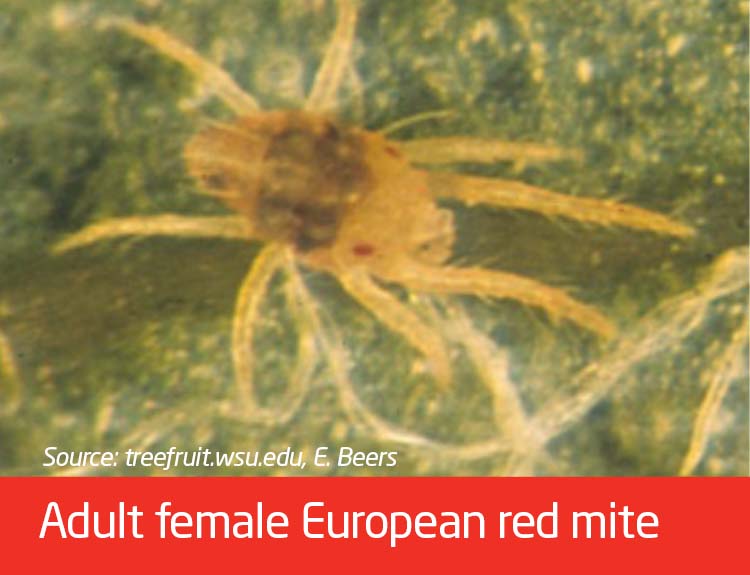 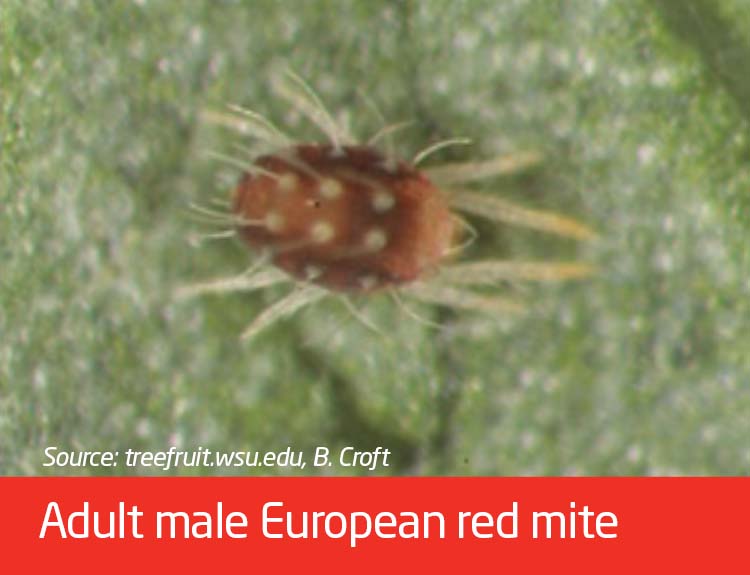 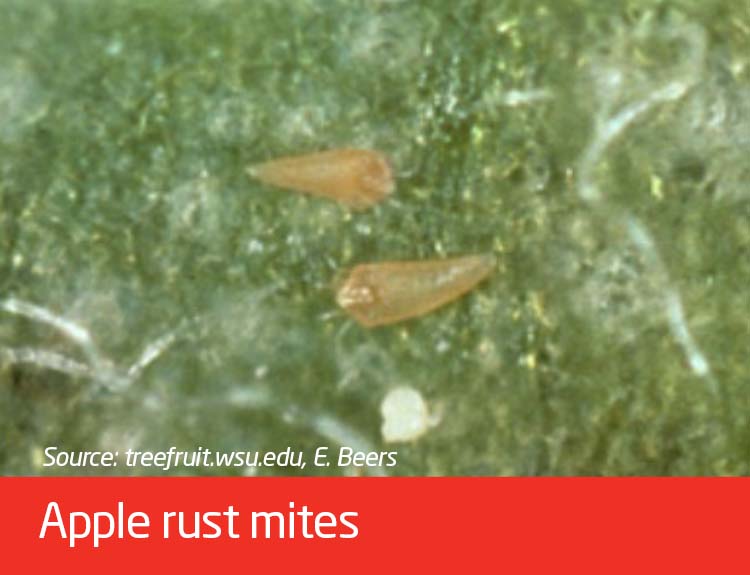 The European red mite winters in the egg stage then the larva move to leaf surfaces, generally the lower side of the leaf, to feed. As foliage becomes mature, adults and immature mites are more likely to be found on those leaves (vs. young, newly expanded leaves). First adults will appear around petal fall in apple orchards.

It is important to monitor spider mite populations in orchards. At a level of 30 mites per leaf, a treatment to curb the population is recommended to maintain optimal production, though growers or consultants may have their own thresholds based on experience and sampling technique.

Regarding chemical control, a delayed-dormant mineral oil spray should be used to destroy overwintering egg populations. In apples, this application will generally provide good control through May and into June. In-season sprays from June onwards should be used to keep spider mite populations under control. Miticides that are soft on beneficials should be preferred.

Apple rust mite overwinters as females in crevices on branches or twigs and under bud scales. They emerge in the spring and mostly feed on the underside of leaves as buds open in the spring. There are multiple generations through the growing season and warmer temperatures favor rapid development, although hot and dry conditions (95 oF and RH below 20%) curb the populations.

The presence of a large number of rust mites can be detected by the color of the leaves, and should be confirmed with a hand lens 10x or better (if a population estimate is needed, the brush leaf method should be used). They provide an important alternative food source for predatory mites, so control is typically not recommended unless populations are high in July and predatory mites are negligible to non-existent.

Blister rust mites, e.g., appleleaf rust mite, rarely infest well-managed apple orchards, however, they should be scouted and monitored if present. If necessary, treatments should be applied to control populations and applications are most effective after harvest when the mites leave the leaf blisters and move to terminal and fruit buds (where they remain exposed until buds swell in the following spring). Pre-bloom treatments can prevent damage that occurs during bloom as well. Again, miticides that are soft on beneficials should be preferred.

Recommendations: For control of mites as part of an overall IPM program in conventional and organic apple orchards: