Meeting the nutrient demand of the potato plant is a critical component of reaching yield potential. Therefore, significant attention is focused on fertilizer rate and timing in potatoes, utilizing soil tests and petiole tissue tests as the main tools to ensure sufficiency throughout the production cycle. However, even when nutrient levels are adequate in early vegetative growth, the potato plant may not grow or take up nutrients optimally. Why?

Cool soils lessen root growth, which reduces early season nutrient uptake, particularly phosphorous. Cool soils also depress soil microbial activity, which causes a reduction in nitrogen mineralization and thus limits the conversion of organic N to plant available N. The effect of depressed soil microbial activity is even more pronounced when there is significant residue with a high C:N ratio (>24:1) from the previous crop. A high C:N ratio leads to N immobilization, tying up mineral N as well, early in the season.

One common way to ameliorate the effect of cool soils is through a starter fertilizer such as ammonium polyphosphate. The phosphorous in the 2x2 or in-furrow starter fertilizer is then concentrated close to the seed allowing for optimal early season uptake, as that placement compensates for the lack of early season root growth. Meanwhile, the nitrogen helps to meet the early growth needs of the potato plant, rather than relying on any N stored in the soil or N mineralization for nitrogen supply early in-season.

This practice may be enhanced to get even better early season nutrient uptake and potato growth using EnzUp Zn in addition to a starter fertilizer. BRANDT® EnzUp® Zn has enzymes that help break down organic matter and exudates in the soil, releasing nutrients that are then more available to beneficial microbes and to the plant. In response, potato plants often exhibit better early-season vigor (increased root and shoot growth). The Zn in the formulation also plays an important role as inadequate Zn results in stunted root and shoot growth. High application levels of P can inhibit uptake of Zn if that nutrient is not applied in adequate amounts as well, including around the banding zone if a P starter fertilizer is used. Therefore, EnzUp Zn can contribute to a more balanced starter fertilizer in potatoes by supplying needed Zn early in-season that balances out the P in the starter fertilizer. 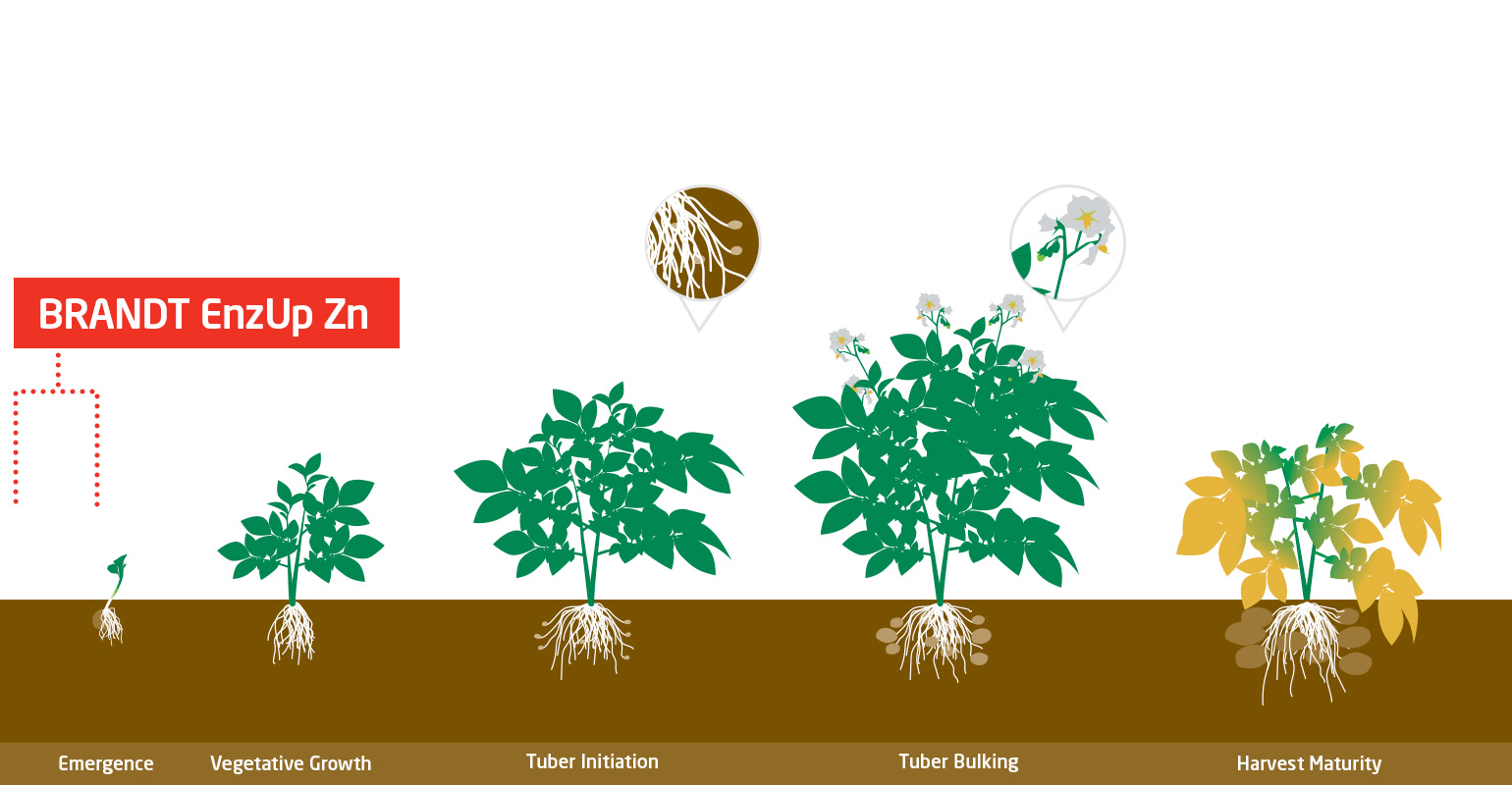 Recommendations1 qt/ac of BRANDT EnzUp Zn with starter fertilizer, such as ammonium polyphosphate, and compatible pesticides