Born on March 19, 1926 in Farmingdale, IL, Glen (G.B. to his friends and colleagues) was the quintessential entrepreneur and a true pioneer in the field of fluid fertilizer. G.B. is survived by his sisters Evelyn Brandt Thomas and Shirley Brandt Hagen, his son Rick (Kristie) and his daughter Terri Gustafson (Tom) and four grandchildren (Sierra-Shae Brandt, Alex Gustafson, Will Gustafson and Joe Gustafson), a niece, a nephew, many cousins and special care giver, Janet Zeigler. G.B. is the son of Albert and Margaret Bomke Brandt; he married Peggy Eileen Carter on September 5, 1960.

In 1953, G.B. founded the business that would become BRANDT, Inc. when he began custom-applying anhydrous ammonia for local farmers. He was using a tractor borrowed from his father; he was only 27.

Glen briefly attended Springfield (IL) Junior College before enlisting in the US Merchant Marines in 1944. He returned home after three years of service to help his father farm but was drafted into the Army in 1950 to serve in Korea. After two years with the 27th Regiment of the 25th Division, he was honorably discharged. He returned to Pleasant Plains to continue farming with his father.

Starting in 1953, Glen lead a line of companies that would become BRANDT, Inc. From Brandt & Gardner Gas Station to Brandt’s Fertilizer Service to Brandt Chemical Company to Brandt Consolidated, Inc., Glen presided over the company’s rapid growth and set a vision for the future. Glen stepped aside as CEO of Brandt’s Fertilizer Service and Brandt Chemical company in 1986, at age 60, to serve as chairman of the board. In 1990, Glen oversaw the formation of Brandt Consolidated, Inc., the company that became BRANDT, Inc. in January 2020.

in 2015, G.B., along with sister Evelyn, was named the Illinois State Ag Ambassador. A patron of the Memorial Medical Center Foundation, charter member of the Abraham Lincoln Presidential Library Foundation and a member of the development committee for Lincoln Land Community College, G.B. was always visible and charitable toward his community. He was also a licensed pilot. In his youth he was a founding member of the band Boogie Woogie Brandt and the Barrelhouse Boys.

G.B. remained active in the Ag business that bears his name until his passing. He was a vocal member of the BRANDT Board of Directors, serving as a consultant the past several years. In addition, he was heavily involved in a number of other related Ag companies as an owner and a board member including Springfield Plastics, TradeMark Nitrogen and Precision Tank (now part of Precision Build.)

Glen was a man of strong faith and a member of Zion Lutheran Church in Pleasant Plains. He loved his family, friends, colleagues and customers. In his own words, he “lived a good life.”

In lieu of flowers, memorial donations may be made to The BRANDT Foundation; go to brandt.co/donate  to donate online or mail to BRANDT Global Headquarters, 2935 S. Koke Mill Road, Springfield, IL 62711. 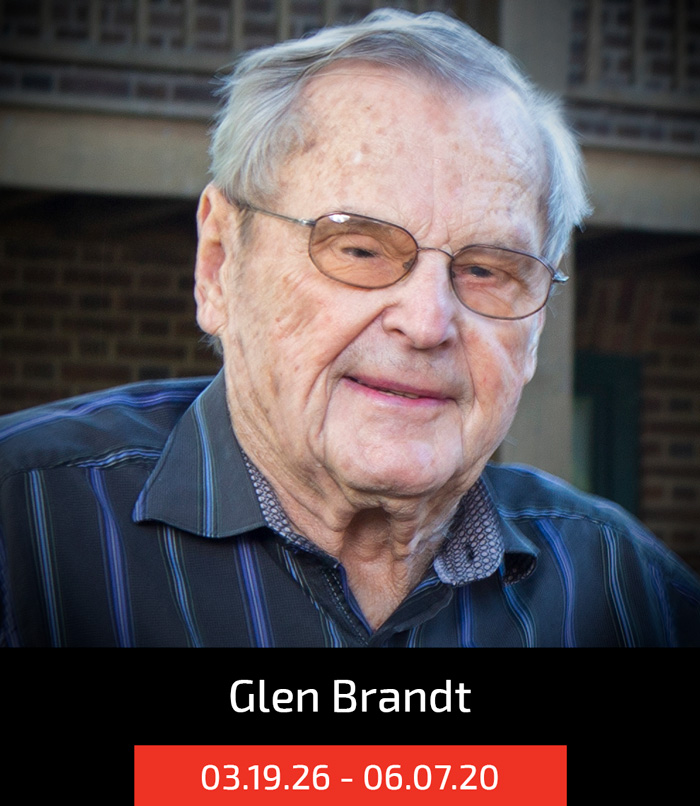